The Belt and Road Initiative

The Belt and Road is a development strategy proposed by the Chinese Government that focusses on connectivity and cooperation between Eurasian countries.

It was unveiled by Xi Jinping in 2013, when he raised the initiative of jointly building the Silk Road Economic Belt and the 21st-Century Maritime Silk Road.
Xinjiang Uygur Autonomous Region is a provincial-level autonomous region of China in the northwest of the country and right in the middle of the silk road. It borders the countries of Mongolia, Russia, Kazakhstan, Kyrgyzstan, Tajikistan, Afghanistan, Pakistan and India. As a consequence of such, it is home to a number of ethnic groups, including the Uyghur, Kazakhs, Tajiks, Hui, Kyrgyz, Mongols, Han, and Russians. Xinjiang Tumour hospital is the largest Cancer hospital in Northwest part of China and is playing a central role in caring patients with Cancer in the region.
Professor Tao Dong from Oxford University was born in Xinjiang and spent all her childhood there, she and Professor Ruozheng Wang in Xinjiang Tumour hospital started their collaboration in 2008 with strong support from the hospital, local government, Natural Science Foundation China, the Ministry of Science and Technology, MRC Human Immunology Unit & Nuffield Department of Medicine (Oxford University).  Since then over £3M has been generated to establish a joint immunology lab, with a MOU signed in 2015 between the Nuffield Department of Medicine and Xinjiang Medical University.
Over the past 10 years, we have trained over 30 graduate students, postdocs and 7 senior clinicians at the Xinjiang Tumor hospital, and established a world class Tumor immunology Laboratory,  publishing 16 high profile  peer-reviewed journal articles. This has put us in a strong position to conduct research at an international level. 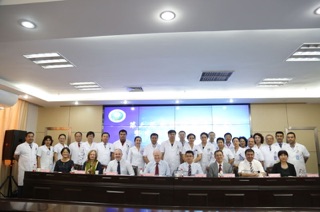 In September 2015, Professor Tao Dong, Professor Sir Andrew McMichael, Professor Yvonne Jones and Mr Darren Nash from the Nuffield Department of Medicine travelled to Urumqi and Kashgai in China, as part of the One Road, One belt initiative. They represented the department at the Silk Road Cancer Immunology International Symposium Series.
In 2017, the Chinese Academy of Medical Sciences approved our application to establish CAMS key laboratory for Onco-immunology and Radiation Therapy based at Xinjiang Tumur hospital with annual funding support. Oxford John Fell fund has also committed the funding for the establishment of this Key Laboratory.  Additionally, in early 2018, the Ministry of Science and Technology approved our application to name our joint activity as a National Centre for International Collaboration with Oxford University focusing on Cancer research.  These initiatives put us in a strong position to conduct world class medical research in association with Chinese Academy of Medical Sciences Oxford Institute to train the next generation clinical scientists in Xinjiang, and will enable us to directly translate our research from the bench to clinic and ensure patients benefit from the most advanced research available.
Yunnan is a province of the People's Republic of China. The province borders the countries Vietna, Laos and Myanmar.  A new link has been developed between CAMS Oxford Institute and The Institute of Medicinal Plant Development Yunnan Branch. A joint symposium on Chinese Medicine and Natural Product research was held between 22nd - 24th April 2018 in Kunming and Xishuangbanna, several potential projects as well as potential collaborations between CAMS Yunnan branch and Oxford's Tropical Medicine research centres in South East Asia were also discussed during the meeting. Delegates at the Symposium in Kunming
In this section